Forskolin is a labdane diterpene produced by the Indian Coleus plant (Plectranthus barbatus). An earlier scientific name for this plant was Coleus forskohlii, and the name forskolin is derived from that. 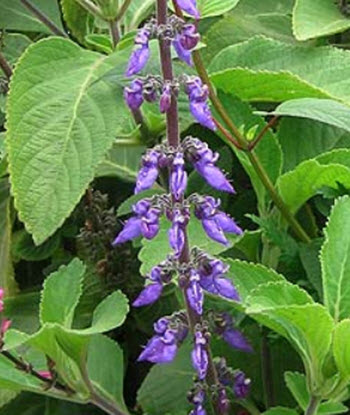 Forskolin is commonly used in laboratory cell biology research to increase levels of cyclic AMP by stimulation of adenylate cyclase.

Forskolin, or parts of the Indian Coleus plant, has a long history of use in folk medicine in various parts of the world, including the Ayurveda tradition.

Forskolin is a smooth muscle relaxant that also exerts activity on inflammatory mediators, including interleukins and histamine, and on calcium ino influx. Because of this, it is currently being evaluated for the treatment of asthma.

Forskolin is marketed by numerous food supplement producers as a powerful weight loss aid, but reliable clinical evidence is lacking in this area.

Forskolin in the human body

Cyclic AMP is an important second messenger in the human body. Without it, a cell can not respond properly to hormonal signals or other extracellular signals.

In the human body, cyclic AMP activates certain pathways, such as Epac and protein kinase A.

Examples of side effects

Examples of reported side effects from forskolin use are tachycardia and arrhythmias.

Forskolin should be avoided in patients with polycystic kidney disease.

It’s safety during pregnancy and breastfeeding is unknown. Embryo-related toxicity has been reported, but the findings are inconclusive.

Indian Coleus is a perennial herb belonging to the mint family (Lamiaceae), and it is a close relative of herbs such as Mexican mint, Cockspur flower and Mosquito bush.

Indian Coleus is native to tropical and subtropical parts of the Indian subcontinent and eastern Africa.

The plant, which can be up toward 60 cm in height, produces large, soft leaves. The flowers grow in clusters and are purplish-blue.

Boldo brasileiro (This is the most commonly used name used in Brazil.)

In traditional folk medicine, Indian Coleus is often consumed in the form of a tisane (herbal tea).

Analysis of tisanes made from Indian coleus show that they contain compounds such as rosmarinic acid, diterpenoids and flavonoid glucuronides.

Folk remedies based on Indian coleus are used: