The baobab trees belong to the genus Adasonia and are native to arid environments. 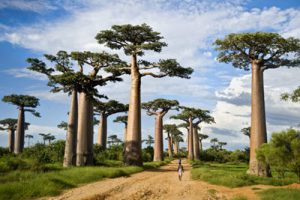 The most widespread species is the Adasonia digitata, which is native to the African continent. From the fruit of this plant, a powder is made that has become fairly common in the dietary supplement trade. On average, Adasonia digitata powder – often referred to simply as baobab powder – contains modest amounts of carbohydrates and low amounts of protein and fat. There are also modest amounts of riboflavin, calcium, magnesium, iron, and phytosterols, and it is a pretty good source of phosphorous, potassium and vitamin C.

Baobab dried fruit pulp was authorized as a safe food ingredient by the European Union authorities in 2008, making it legal to offer it commercially within the union. Later that year, it was granted GRAS (generally recognized as safe) status in the United States.

The fruit has an acidic and citrus-like flavour. Here are a few examples of how it is consumed within its native range:

The seeds of some species are a source of food oil.

The leaves are some species are eaten as a leaf vegetable.

Indigenous Australians have a tradition of making string from the root fibres and decorative crafts from the fruits.